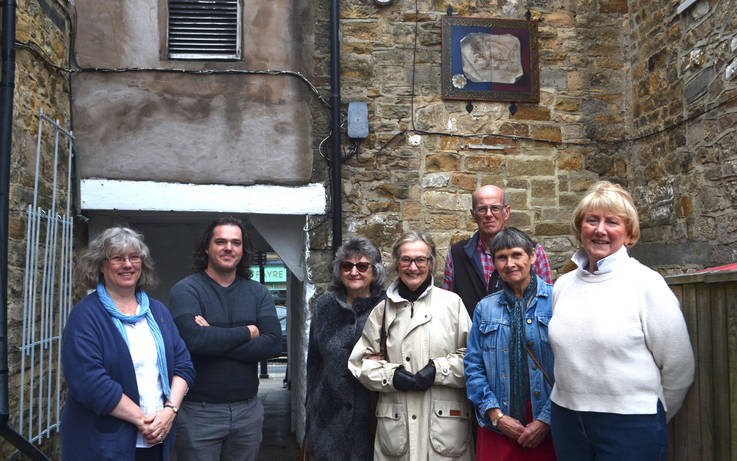 A PAINTING depicting the emblem of England’s last Plantagenet king has been on display at Barnard Castle as part of efforts to tidy up a historic lane.
The artwork depicts the boar of Richard III and was mounted in Star Yard to highlight the connection between Barnard Castle and the King, who obtained the castle in 1475 as part of his Neville legacy.
The painting on marine plywood, mounted using period cast iron brackets, shows images of Richard III, including the White Yorkshire Rose.
The piece was commissioned by Roger Peat, a resident of the city, and it took artist Cédric Charleuf about four weeks to complete it. Mr Peat and his band of volunteers cleared the lane that connects the public car parks to Horsemarket.
King Richard III’s boar appears on several buildings in the town, but members of society insisted on using the one in the coat of arms of Barnard Castle. Mr Peat said: “We got permission from the owners, the Lorimers and Dinsmore families, to do the job and I initially thought it would go well with murals on the walls similar to some lanes in Staithes.”
Damp Walls put in paid plans for a mural and it was agreed that the wall art would be easier to maintain.
Mr Peat added, “That way if he needs touch-ups it’s easier to do. Christine [Naseby] was instrumental in getting all the details correct – that’s why he’s here. We intended to place the board directly over the passage, but for health and safety reasons we thought it best to place it on its side, out of the way. It’s also more eye-catching when people step out of the parking lot.
Kim Harding, Northern Dales Richard III Society, said: “Everyone is absolutely amazed by this. It’s incredible. We were allowed to use this design of the boar, which is inspired by the relief above the oriel of the castle.
“We have a lot of boars at Barnard Castle and now we have one more.”
There are now plans to install an information plaque detailing Barney’s connection to Richard, who was the last English monarch to be killed in action.