‘Thesmophoria’ brings together the work of four of the most exciting young female painters, all living and working in the UK; Ming Ying, Lily Macrae, Jessie Stevenson and Gina Kuschke. In their four practices, the emphasis is on materiality, gestural features and expressionism. As each artist has their own unique pictorial language, presented as a group, a narrative emerges: an exploration and meditation on the creation of form.

â€œCreating my first physical show, ‘Thesmophoria’ with India at Soho Revue was a pleasure and it was such a special opportunity to work with Ming, Lily, Jessie and Gina because their unique approaches to materiality, form and scale are best appreciated in the flesh.These are definitely four incredibly promising young artistic talents and I can’t wait to see where their respective careers take them.

â€œThesmophoriaâ€ takes its name from an ancient Greek religious festival, organized in honor of the goddess Demeter and her daughter Persephone. Held annually, most often in late fall, around the time the seeds were sown, it was a celebration of human and agricultural fertility. The festival was one of the most celebrated in the Greek world, reserved for adult women, the rites and rituals performed during the festival were kept secret and remain a mystery. ‘Thesmophoria’ an extension of the epithet of the goddess Demeter (Thesmophoros) translates to ‘the transport of the things put down,‘with etymological roots in the idea of â€‹â€‹bringing wealth and treasure.

In the spirit of the ancient Greek autumn festival Thesmorphoria, Purslane and Soho Revue have reinvented the rites of celebration, through the creative act of putting paint on canvas as a metaphor for the ceremonial nature of transportation and poses objects.

â€œI am very happy to work with Charlie de Purslane, I started to follow his online platform during the pandemic and I quickly realized that we were operating in the same circles. We both share a similar vision and are drawn to the same artists; it’s a very fitting match.

The â€œTangled in the Blueâ€ group exhibition presented by the ethical art fundraising platform Purslane aims to raise funds for Shelter. [â€¦] 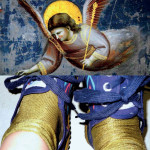 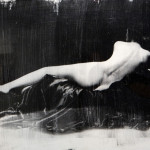 Soho Revue is a brand new creative space in the heart of Soho, London. Opening on Greek Street on Tuesday April 14, it reclaims Soho’s artistic status by creating a credible platform for emerging creative talent.