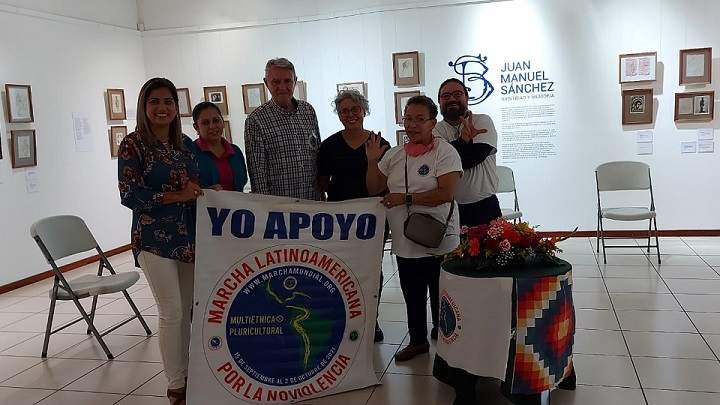 Reception in San Ramón of the first Latin American march for multiethnic and multicultural non-violence.

A report by Roxana Cedeño Sequeira.

With the support of the Centro Cultural e Histórico José Figueres Ferrer (CCHJFF), we hosted the first Latin American March for Multiethnic and Multicultural Nonviolence in the city of San Ramón.
Note from Roxana Cedeño Sequeira.

We are happy to share with the Latin American families who virtually follow us on this march, gratifying moments today, we welcome the walkers, among whom we are accompanied by Mr. Rafael de La Rubia, who comes from Spain, humanist, non-violent social activist. Founder of the association Monde sans Guerres and promoter of the first and second world march for peace. (2009 one and 2019 the other). Also, the first march in Central America in 2017 and the first march in South America in 2018.

Mr. Geovanny Blanco, National Coordinator of World Without Wars and Without Violence in Costa Rica, also participated in this first day.

Likewise, Ms. Mercedes Hidalgo, member of World Without Wars in Costa Rica, among others.

Mrs. Grettel Ávila Vargas, Director of Circuit 01 of the MEP of the Ministry of Public Education of San Ramón was present at the reception.

We have experienced one of those wonderful synchronicities that occur, since the structure where this Center is currently located is the (renovated) house where Mr. José Figueres Ferrer (affectionately known as Don Pepe) was born.

Don Pepe, humanist, statesman and politician, is recognized around the world for having had the vision in 1948 to abolish the army, which allowed the strengthening of a culture of peace and the promotion of development. social with other national leaders of the time.

The CCHJFF thus honors his memory and his heritage by trying to make the site a refuge, a welcome and a promotion of the historical memory of the different expressions of art and culture of the city where he was born, San Ramón de Alajuela .

This is because he was a person committed to the culture and culture of the multiple artistic manifestations that motivated the creation of the now famous phrase “why tractors without violins”.

We welcome you with enthusiasm and joy, our conviction is to promote a culture of Peace, because Peace is Strength.

The original article can be found here