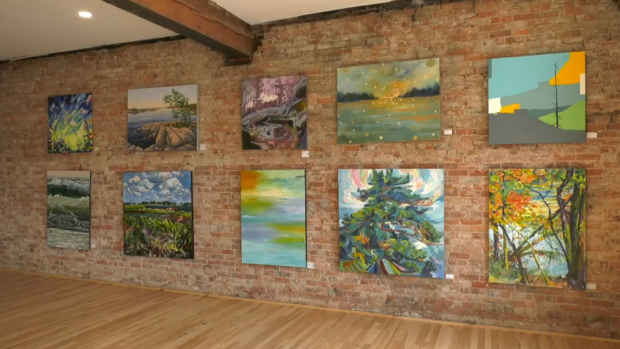 BARRIE, ONT. – Since the start of the pandemic, the owner of an art gallery in Orillia says sales have skyrocketed.

“Industry-wide sales are on the rise,” said Blake Fletcher, co-owner of Cloud Gallery. “We had high expectations when we started and we just exceeded those expectations.”

“It’s about celebrating Ontario and the natural beauty of the province,” said Fletcher.

Since the opening of Fletcher and his father Mark in April, they are already celebrating a milestone by selling almost 100 works of art.

In part, according to Fletcher, something is due to an increase in local tourism and a shift in priorities as to where people spend their money.

“They don’t take as many trips to Mexico and instead they spend money on home improvements and renovations,” Fletcher said. “So there are a lot of people who come with white walls and we are happy to help them fill them.”

But it’s not just foot traffic that drives sales up. The gallery is also causing a stir online.

“Online promotion is really where we try to differentiate ourselves,” Fletcher said. “I think we had around 10,000 impressions on Google in the last month.”

The increase in sales occupies artists like Catherine Cadieux.

“Sales have increased,” said Cadieux. “I sold bigger pieces and I would say more consistently.”

Cadieux is an abstract artist who has been painting for 20 years now.

Her work is on display at the gallery and said in the same way that the pandemic separated people, art brings them together.

As for the future of the gallery, says Fletcher, as the restrictions are lifted, there will be in-person events.

The father-son duo are also considering a second location and expanding their roster to include more Canadian artists.