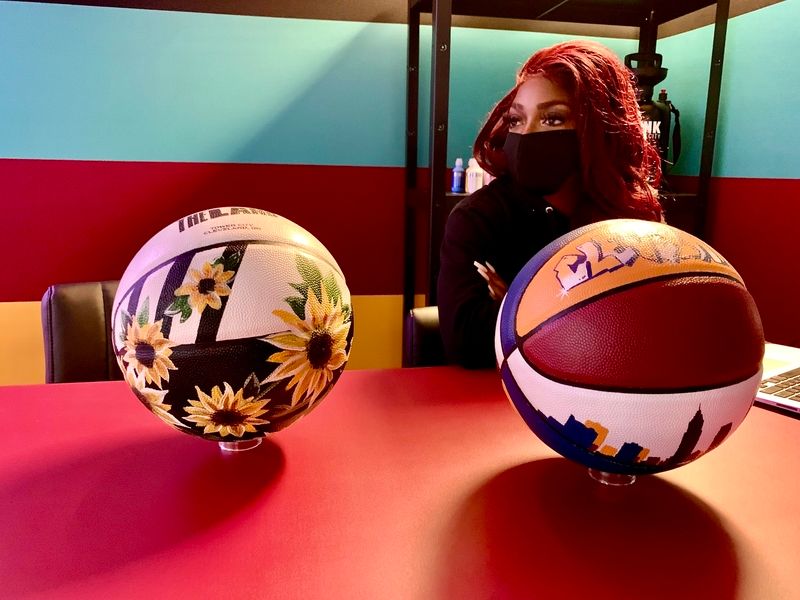 A storefront for art and fashion has opened in Tower City, part of owner Bedrock’s effort to create buzz in the struggling mall ahead of NBA All-Star weekend in late February.

The Land x Complex Shop is a collaboration between Bedrock and Complex Networks, a New York-based media and entertainment company focused on youth culture. The pop-up store, adjacent to Champs Sports near the food court, will feature a curated collection of apparel and other merchandise, including works by artists native to northeast Ohio.

Early Friday, January 14, just before the grand opening, Stina Aleah showed off hand-decorated basketballs at a counter at the back of the space. The 33-year-old self-taught artist, who owns a studio on the city’s West Side, is known for her oil paintings and murals.

Painting on a spherical, pebbly surface was a big difference from canvas or walls.

“The first one was awful,” she laughed.

She will paint custom designs on basketballs, including limited-edition basketballs that Detroit-based Bedrock and Complex drop off at promotional events across the city, by appointment.

“When we started talking to Bedrock, the goal was really, ‘How do we give Cleveland creators the opportunity to tell their own Tower City story?’ Because everyone I’ve spoken to about Cleveland of a certain age talks about the story…and how awesome it was when they were all younger,” said Stanley Lumax, CEO of Complex Networks Climate , which helps brands tap into younger consumers.

Akron native Racks Hogan, an upholsterer artist, has plenty of Tower City stories. He remembers shopping for Ed Hardy clothes, eating at the food court and, best of all, wandering into the now-closed movie theater for a matinee. “You couldn’t beat it,” he said.

Now he lives in New York and sells handmade rugs on social media, where he has built a following as Blacaso – short for Black Picasso, he said. When Complex contacted an opportunity in Cleveland, he jumped at the chance to go home.

“When they first mentioned that and said Tower City, I thought that was a typo,” he said.

Hogan started out making t-shirts but switched to carpets during the pandemic when he needed a soothing diversion. Some buyers hang his creations on their walls. Others throw them on the bathroom floor.

Lumax views the store, where new artists will drop by each week, as an opportunity to collect data and get a sense of what resonates with shoppers and visitors in Cleveland.

Complex Shop is primarily an e-commerce platform, though the company rolls out a pop-up store during its annual ComplexCon festival, which usually takes place in Long Beach, California.

“Our hope is that this will start a conversation between Bedrock and all the creative minds in Cleveland,” Lumax said of the Tower City commitment.

Bedrock, which purchased the avenue from Tower City in 2016, is trying to reposition the property as a “marketplace” – a renewed destination for shopping, dining and entertainment.

Although the company’s long-term plans are still taking shape, executives and consultants intend to fill empty storefronts and increase foot traffic at major events. The 2021 Rock & Roll Hall of Fame inductions, which took place downtown in October, kicked off a first wave of rentals. The NBA All-Star Game is sparking a new wave of offers.

Xhibition, a Cleveland-area streetwear retailer, will take over the former English Oak Room with a large pop-up store and event venue in February. On Friday, construction workers were busy in other vacant spaces, including the former Hard Rock Cafe overlooking the Cuyahoga River.