Artist Cristian Zuniga was walking his dog on Friday morning, browsing Instagram, when a familiar image stopped him dead. It was his, the designer thought: an illustration of two arms wrapped in an embrace he created and started sharing in September of last year. But the design wasn’t on the socks or t-shirts that Zuniga sells through his creative and graphic design consultancy, Object Finds Studio. Or on his Instagram, where he is featured prominently. Or on the city walls around Union Market, where Zuniga graffiti what he dubbed â€œthe hugâ€. Instead, the similar print was sported on a take-out bag for No Goodbyes, a new restaurant at the Line Hotel DC in Adams Morgan that opened on Friday. The Instagram post, for which all comments have since been removed and disabled, announced the restaurant’s arrival with the tag, “Come say hi to No Goodbyes, DC â€” We’re Open!”

What has unfolded since is a heated debate, widely aired on social media, about artistic ownership and the censorship of social media comments. Zuniga maintains that the illustration is his. Stefan Merriweather, senior director of content and social media strategy for The Line Hotel, says the illustration is original, a work he commissioned for No Goodbyes from Los Angeles-based design studio Made by Us. Washingtonian contacted Made by Us management for comment, although no one has responded yet.

â€œWe liked the illustration because it captured the feeling of a hug,â€ says Merriweather, who is based in California. â€œWe wanted people to feel embraced when entering the restaurant. If you were to google “shaking hands,” there are 50,000 illustrations of a similar thing. We didn’t think we were doing something proprietary.

Zuniga recognizes that hugs are, of course, universal and that the illustrations are not the same. Its design features a face and a slightly different positioning of the hands. â€œAs a designer, you take references and copy artists and other designers. You twist it enough to make it your own and tell your own story – that’s the hardest thing as a designer, â€he says. Yet “there are too many coincidences when you look at the end of the story.”

Zuniga is the former creative director of Foreign National, the hospitality company of chef Maketto Erik Bruner-Yang who opened two restaurants with the Line Hotel in 2017. Brothers and Sisters and Spoken English both closed after Bruner-Yang parted ways with the Line in January, and Zuniga is now with Maydan / Compass Rose. But the artist spent more than two years working closely with the hotel’s concepts, including running a whimsical Instagram platform for spoken English, which was even featured in Enjoy your meal (“We are obsessed with this restaurant’s weird and wonderful Instagram account”). The studio that is said to have created the hug design for No Goodbyes, Made by Us, has also worked with Bruner-Yang over the past year, contributing ‘brand identity’, collage and panels for her new Roost, Yoko & Kota restaurant. 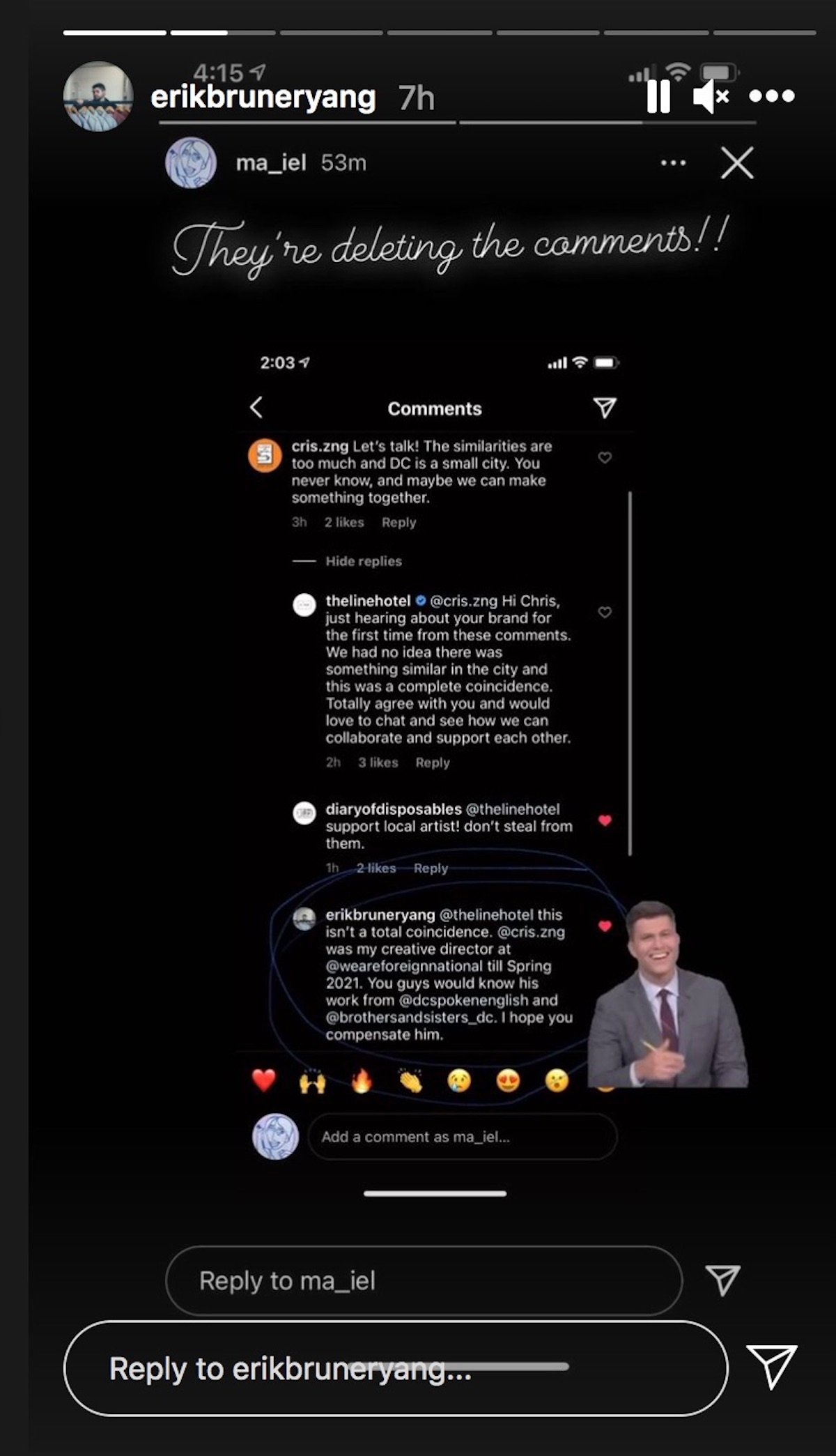 Bruner-Yang, who declined to comment directly on the article, lambasted the hotel in a story for its more than 12,000 Instagram followers over the weekend, saying, â€œ@thelinehotel it’s not a total coincidence. @ cris.zng was my Creative Director until Spring 2021. You should know about his work through @dcspokenenglish and @brothersandsisters_dc. I hope you will compensate him. Bruner-Yang shared comments as they were quickly deleted, including those from other big names in the hospitality industry like Chopped star Adam Greenberg, who posted â€œSteal ppl’s work and advertising like yours ?! Then remove comments in your IG to cover it?â€ followed by a vomiting emoji.

Merriweather acknowledges having removed and disabled comments. â€œPeople weren’t asking questions, they were just attacking us,â€ Merriweather explains. â€œPeople ask, why are you deleting comments? I think social media and mental health is a real thing. I am a real person on the other side. Instagram has these tools to help protect you from harassment and attacks. I try to protect my own sanity from being attacked by people. At the same time, we are trying to open the restaurant. I made the decision to turn off comments to silence the noise. 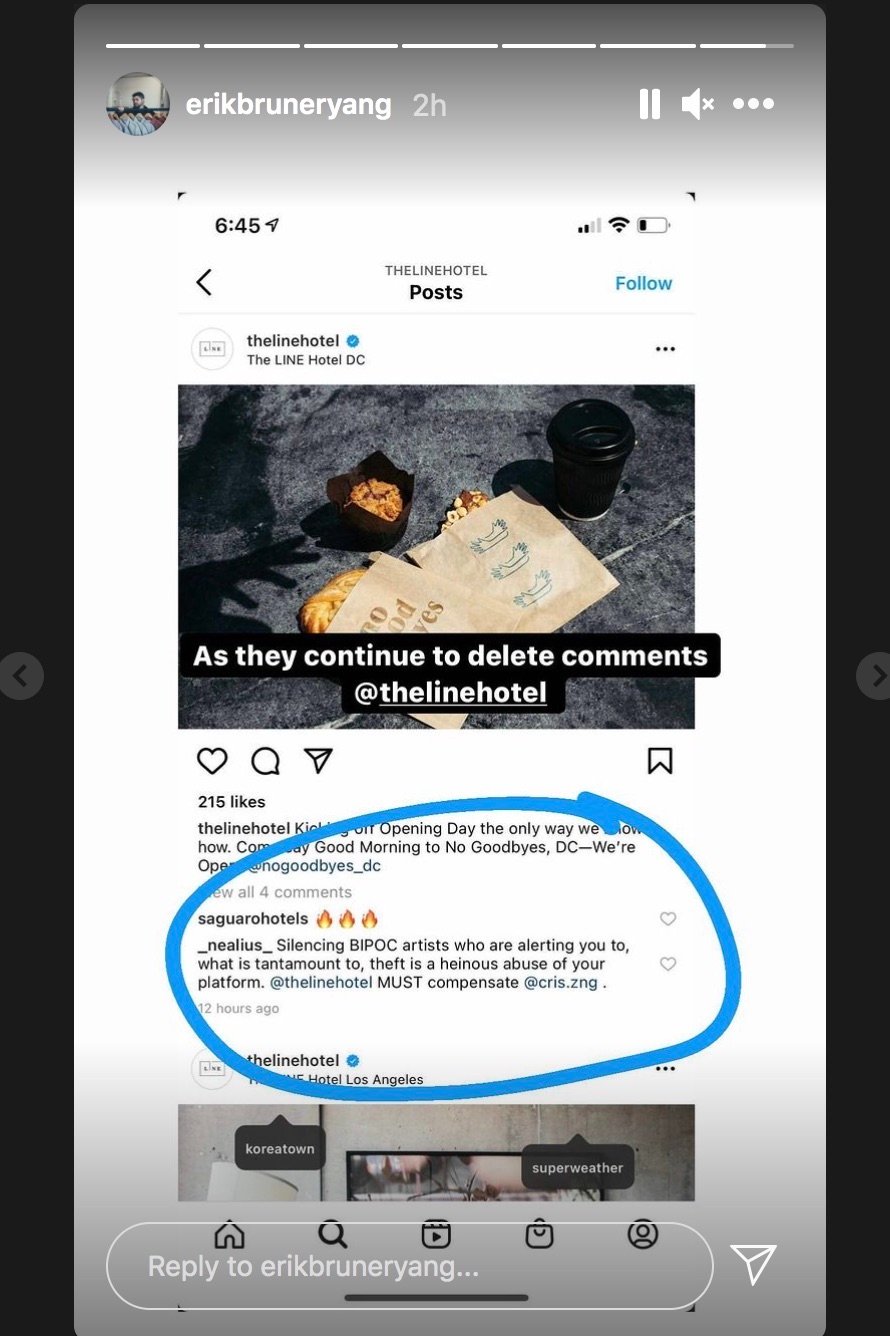 Merriweather alleges that while he knew Zuniga as a Creative Director and found out that he was in previous group emails with him, he did not know Zuniga “as an artist”.

â€œWe didn’t know about Cristian’s work until he commented on the post. We are all about inclusiveness and discovery. We want to discover new artists, â€said Merriweather, who said her next social media post might call forâ€œ tagging artists in your community â€. â€œI’m grateful that this happened, it gave us the opportunity to experience Cris’ art. This conversation is great, it’s good for him, it makes him more aware.

Zuniga was hesitant to speak up, describing himself as a guy who is “really low key in life and in general”. And the line isn’t exactly an inconspicuous place. There has been a lot of controversy surrounding splashy boutique ownership since its debut in December 2017, starting with criticism of the developer for receiving $ 46 million in tax relief from the DC government without hiring the number of city residents he promised. Last year, City paper Exposed allegations of racial discrimination and a toxic work environment at restaurateur Spike Gjerde’s upscale Line restaurant, A Rake’s Progress. No Goodbyes’ chef, Patrick “Opie” Crooks, who was the executive chef of Rake’s before it closed in June last year, expressed his regret in a story of DC Eater, stating: “After a ton of soul-searching and a ton of thinking about how this restaurant works and the things that have happened, I just don’t think I’ve personally done enough to influence the culture of the restaurant.” The new restaurant has integrated training on diversity and inclusion. Most recently, the hotel property, previously operated by Sydell Group, was acquired by Membership Collect Group (MCG), which also operates the luxury chain Soho House.

Zuniga, who is a Chilean immigrant, says he finally decided to speak up because he still knew people at the hotel and had strong support from friends in the hospitality industry. He initially created â€œthe hugâ€ in September 2020, after helping to create an art exhibit at H Street Spot Shopkeepers with all the folks in the creative hospitality industry from Foreign National – photographers, painters and designers. â€œWe wanted to boost the morale of all employees,â€ Zuniga explains. He originally drew the hug with a marker on a piece of cardboard, which he keeps at home.

â€œIt all depends on how a hug is more than just an expression. It releases hormones, helps improve your mood. My girlfriend and I are from Chile. We have no family in the United States. When you lack family support, especially during the pandemic, it becomes more difficult. When you look at the design, it evokes warmth and happiness. It’s almost a self-health exercise and helps you find ways to be better.

Zuniga and Merriweather first spoke on Friday, where Merriweather claimed the similar illustration was a coincidence and expressed interest in working with Zuniga in the future. Zuniga says his last contact with Merriweather and the line went unanswered. In a Monday text note to Merriweather, the artist requested that the graphic not be used in the restaurant’s branding.

â€œI am not coming to fight. I’m not telling them I want X amount of money. All I’m saying is that you should learn, as a big company, and be more respectful, â€Zuniga said. Washingtonian. â€œAt the same time, you have to open a window for people to express themselves,â€ he said, referring to the hotel’s social media, which he implored Merriweather to keep open for discussion. “If you don’t allow that, there are deeper problems.”

Anna Spiegel covers the restaurant and bar scene in her native DC. Prior to joining Washingtonian in 2010, she attended the French Culinary Institute and the Master of Fine Arts program at Columbia University in New York, and held various cooking and writing positions in New York and St. John, in the US Virgin Islands.